Blog Bat Around: The Year's Best (and Worst!)

The question is one we ask every year. What is the best set of the year? What is the worst? It's easy to tear apart an issue - it's too expensive, it's uninspired, there's not enough hits - but finding the joy in the year's releases might take a little bit more thought. Or maybe not. But all of us in the blogosphere are critics of a sort, and like a movie critic, we tend to see it all. And when you see it all, you become a card snob, hoping for something that really stands out. 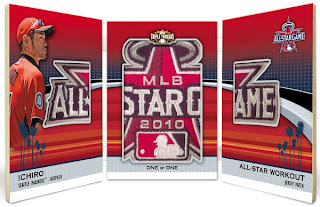 I think most of us are pretty well grounded, though. And when cards are released, we find the silver lining (um, silver bordered parallel?) in the sets. If not, why are we here? 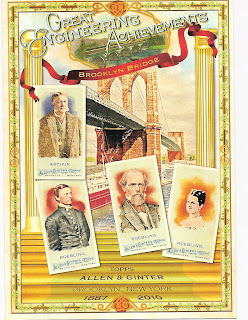 This was an amazing year for baseball card collectors. My generation's collectors returned to the hobby, and many of us started blogs. (This is really my second return to cards, as I took about a year off in 2010.) Everybody found something to enjoy at different price points and with different styles, which really stands out in my mind. From flagship and Opening Day to Tribute and Triple Threads, there was a great variety available to collectors. 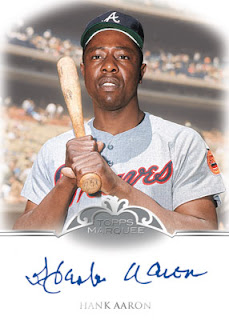 Information on the current Blog Bat Around can be found here. The question:
The 2011 baseball card collecting season is finally over -- other than Bowman Sterling. What set or release stands out as your favorite from the year? What set or release brings your lunch back up in your throat?

So let's get down to it. What is my favorite set or release of the year? Let's count it down.

Honorable Mention: 2011 Goodwin Champions. Upper Deck was very successful with this multisport release, and proved that you don't need licensed logos to make a quality set. I like art sets, which certainly helps the Goodwin cause. I enjoyed the odd casual shots of players like Johnny Bench, though the paintings are good enough that some action (without logos) would be nice. That said, Upper Deck had a great range of subjects from multiple sports and history, which makes for variety while flipping through the cards. If this was a pure baseball release, I'd put it at number three.

#5 Bowman's Best Inserts. While the set is a reprint of a not-too-distant past design, it's a standout design and comes in three background colors: red for veterans, blue for prospects, and green for rookies. Gotta catch 'em all! Oh, wait, that's something different. 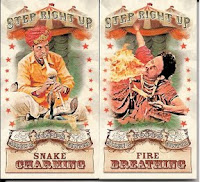 #4 Allen & Ginter Mini Step Right Up. It seems like the big picture as far as this year's Ginter's minis are concerned was freaks - carnies, ghosts, and ... beards. The Step Right Up insert set is certainly my favorite of this year's selection.

#3 Lineage Inserts. The base cards had a nice front but might be the most boring backs seen on a major release since the 1950s. In fact, the backs on all of the inserts in this set were fairly boring - the Stand-Ups and 3-D cards were essentially blank-backed, and the Rookies set has very little information (granted, they're true to the originals they're reprinted from). While all the inserts in the set are throwbacks to older Topps issues, this collection of great designs makes for a fun group of inserts to collect.

#2 Kimball Champions. I believe I just finished my Kimball set via Sportlots yesterday. Kimball is a perfect candidate for a full multi-sport release. If Topps was to replace Allen & Ginter with a new issue, Kimball should be it. They wouldn't even need to change the format! It's another art set that just looks great, especially in mini form. 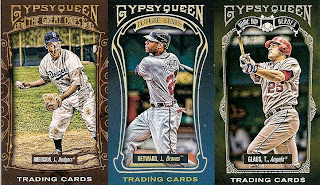 #1 Gypsy Queen. I love this entire release. The paintings are gorgeous and the inserts have stand-out designs. The retail-only inserts are even better! The parallels of the base set sparkle brighter than a Twilight vampire and do it in a way that card collectors can enjoy. This is the first "master" set I've ever put together (I'm nearly done!) - the full base set and every insert set. I would have loved it even if nobody else did (see also: National Chicle base set). It has everything I like - a solid design, a great checklist, and quality artwork. I only hope next year's inserts are as good as this year's!

I also have to say that the Topps flagship design for the year is very attractive, and the photography was noticeably better than in the past.

What about the card issue that makes me sick? There are two that I need to mention.

#2 Triple Threads. The blasted thing is just way too expensive, especially for what most people pull. Let's face it, a single-swatch plain white relic is just that - plain, regardless of the serial numbering. A "triple" swatch card with three white swatches is just a single swatch in my mind. It's also the biggest release this year, at 99 sets. Yes, it's fun to see the phrases they come up with for the multi-swatch cards, but this set is the thorne in the side of my type collection. (And that Heath Bell card? Yes, I own it.) The set isn't ugly, it's just overpriced and complicated!

#1 the entire Bowman line. Of the approximately 1100 card sets issued so far this year that are recorded in the Beckett database, 279 of those carry the Bowman name. I know there's a place for Bowman, but over the years it has evolved from a single set to a bureaucratically complicated release. There are so many variations - multiple parallels, two base sets, multiple prospect sets with their own parallels, and then the Chrome set with its own parallels, prospect set, and prospect parallels. Then, there are overly-silver-foiled Platinum and Sterling lines. Why can't Bowman be like Topps flagship when it comes to organization?

Other than the backs of Lineage, there really weren't any ugly sets this year. It really was a good year for collecting!

Speaking of a good year, it's been a great year for contests. The Diamond King's got something great going on, but you need to get over there NOW! Hurry! It's your last chance!
at 3:00 AM