The Hawks got their start 80 years ago, formed by the Nankai Electric Railway Company in 1938. They went by a couple other names before finally settling on the Hawks in mid-1947. While most people know the Yomiuri Giants, the Hawks have had a few dynasties, in the 1950s, 1960s, and currently. Over 80 years, the team has clinched the league pennant 20 times (two Japanese Baseball League pennants and 18 Pacific League pennants), and were the Japan Series champions eight times, including last year.

The pack-based set came five cards per 400-yen pack, with the usual 20 packs per box, and 12 boxes per case.

There are 90 cards in the base set and 18 insert cards across two sets, plus autographs.

For some reason, I don't have, or just didn't scan, cards from the first part of the base set. Hawks History breaks the 80 seasons down to give an overview of the club's performance through the years. This subset makes up the first nine cards in the base set. 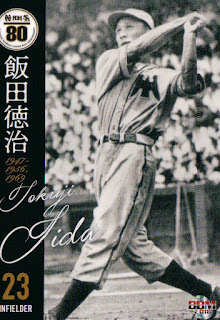 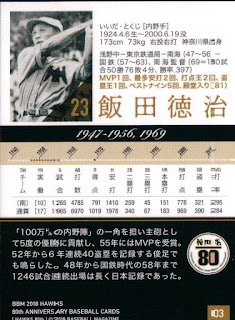 Retired players are the next 48 cards in the base set. This is a good, solid design in my opinion, despite being fairly simple. The player's name in both kanji (using a more traditional, handwritten-styled font) and English script is on the front, along with his active years, jersey number, and position. Backs have usual career highlights along with Hawks career and full NPB career stats. 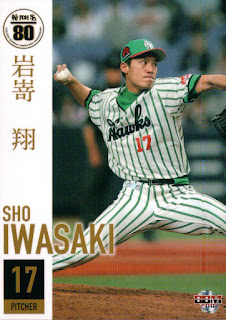 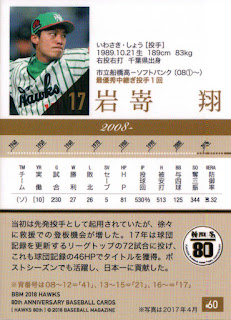 The 33 active players in the regular set have a slightly simpler, more modern design - the script is replaced by a modern font and the player's active years aren't shown on the front; they can be found on the back along with career stats and the usual career highlights.

The two insert sets are split similar to the base set. 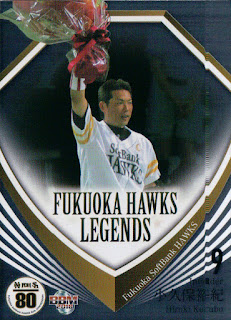 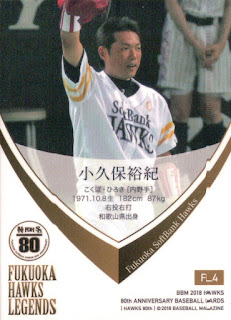 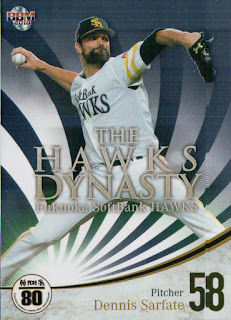 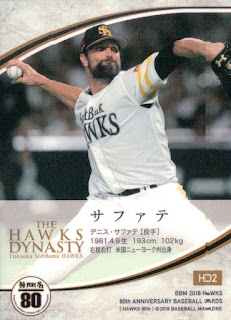 The Hawks Dynasty focuses on active players, again with nine cards and an HD prefix.

Both insert sets can be found in four serial-numbered parallels:


Finally, as mentioned above, there are autographed cards for 68 (by my count) players. Print runs range from 10 to 90 copies each. Notably, Sadaharu Oh, who formerly managed the Hawks and has a large museum inside the team's stadium, has 10 autographed cards in the set.

I like this set's design enough that I've made this the first anniversary set to add to my collection. I will probably pick up one anniversary set for each team as I find them at affordable prices, but there is no rush on that.
at 8:00 AM