In the past few years I've picked up Upper Deck's sets issued in 2000-2001 here in Japan. Yes, Upper Deck issued NPB baseball cards for a couple years. At some point I'll do a full post on them, but for now I'll just share some cards that put me a little closer to a full set.

These three cards are from 2000 Ovation. The base set's first 30 cards were short printed as a "Rising Stars" subset. They're numbered to 2000 copies each, which is actually pretty high, but for some reason dealers sell these for a premium - we're talking $3-5 each at times. Maybe it's because they're "rookie" cards too. But they aren't exactly big stars. Anyway, three cards down, 27 to go. 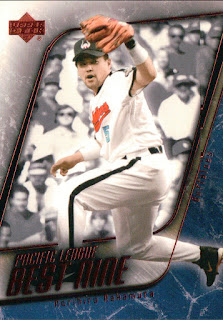 From the flagship Upper Deck set is this Best Nine insert.

Until I get lucky and find a lot of inserts from these sets at low prices, I'm probably not going to add any more to my collection. I've completed the base sets already... or, I should say I've purchased all of the base sets already, and I have a few insert sets done too. So now I'm just going for the other inserts to give me a master set. There are relics and autographs involved but I'm not chasing those.
at 3:00 AM