Some New Releases in Japan

While you all anxiously wait for 2013 Topps to hit shelves in the States, I've been able to enjoy a bunch of releases over here in Japan. In fact, some of the first 2013 sets have already been issued. 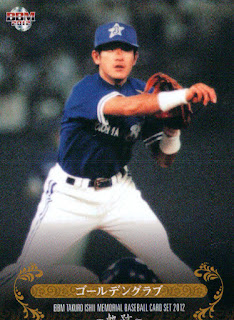 The Takuro Ishii box set came out late last year. Ishii was one of the best shortstops of the late 1990s/early 2000s. The set has 27 cards, as is standard with BBM issues, plus some sort of special card. 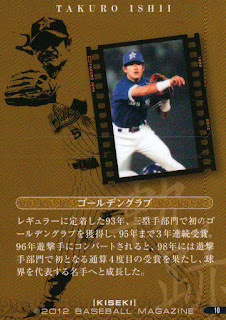 Here's the back. Not too shabby. 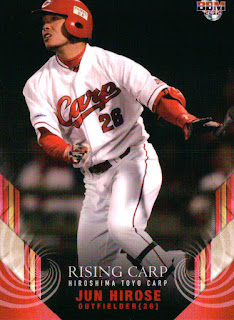 Rising Carp is a rookie/young player set for the Carp, obviously. This, too, is a set issue. 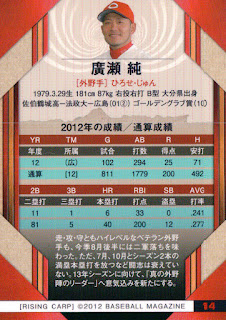 The backs remind me of Panini products in design. 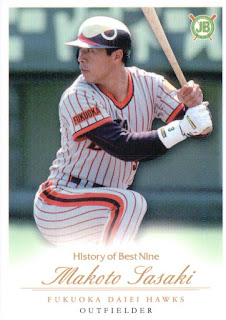 Epoch recently released a History of Best Nine set. Best Nine is sort of an end-of-the-year All-Star team by designation only (not to be confused with the actual mid-season All Star games). The design isn't bad though it is a bit plain especially with that large white spot at the bottom for all the text. 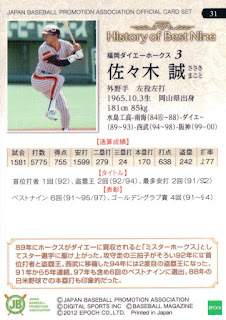 The backs use the same photo as the front. I like Epoch products a little, possibly because they're a contrast to BBM's modern, relatively uninspiring designs. 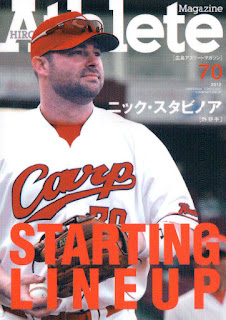 Sports Athlete Magazine issued a Hiroshima Carp set recently titled Starting Lineup. There are several subsets in the release, but the base cards look just like magazine covers. 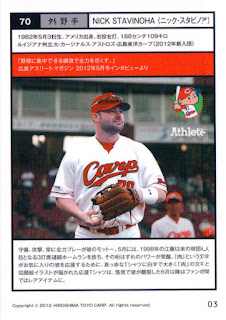 And again, the backs use the same photo. This is card number 03 (see the bottom of the card) - the 70 at the top is Stavinoha's jersey number. I saw him pitch when I was in Hiroshima and he got the save in a tight game. 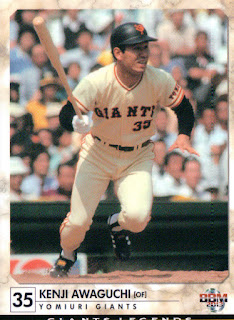 Back to BBM, this Giants Legends pack-based set is tagged as a 2013 issue though it came out in December. The bottom black border with "GIANTS LEGENDS" got cut off a bit by my scanner. It's not a bad looking set and features a lot of big names, of course. 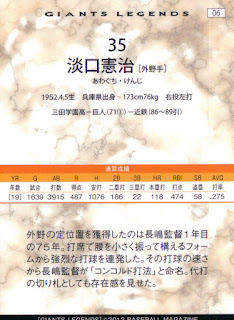 The backs feel kind of empty. Perhaps they could have added career statistics? A couple insert sets were released but I'll have to show those to you later this week or early next week, because I don't have them scanned yet (I bought them later). 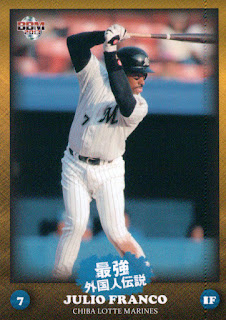 A front-runner for 2013 Set of the Year is this release. I'm not sure what the correct translation will be, but I'm titling this Foreigners (the translated word comes out as Aliens). Featuring cards of Julio Franco, Cecil Fielder, Randy Bass, Tuffy Rhodes, and a whole ton of other gaijin stars, I bought the complete 99-card set. This is the first complete baseball set I've bought in Japan, I like it that much. The design is solid with an historical feel while not overdoing it, plus it pays tribute to people like me - those who came to Japan from other countries. Once I saw Cecil and Julio in the set I knew I had to have it. 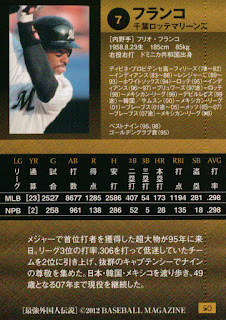 The backs use the space well, even though the photo is repeated yet again. There is a lot of information on the cards, including MLB and NPB statistics as applicable and write-ups. 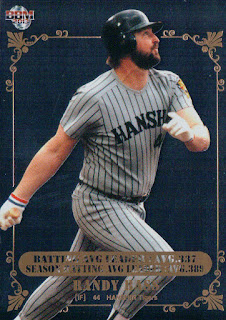 Being a pack-based set, the Foreigners issue has an insert set. This foilboard set is done well, because the text is printed in contrasting foil that scans properly. The focus of the set is on foreigner leaders in statistical categories. 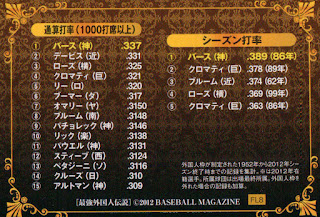 Randy Bass is one of NPB's best foreign hitters, and as you see here he leads gaijin in career and season batting average. He's also quite a slugger. Note the prefix on the card number FL8 - hence my naming the set Foreigners Leaders. Card number prefixes help to decipher card set names!

That's all for now, though there are more sets to be shown soon. I'll have the Nippon Series set and some more inserts soon, plus a couple other releases are set to hit shelves in the next few weeks. BBM's First Version should be out shortly, too.

Speaking of new releases, I saw sell sheets for a couple more sets at the card store from the minor manufacturers. 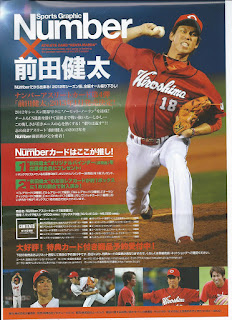 Sports Graphic Number is releasing a Kenta Maeda set soon. It might already be out (I think the release date is this week). Maeda has been with the Carp since his rookie year (2008) and has compiled a 56-43 record with a 2.47 ERA and 739 strikeouts over four years. This year, he went 14-7 with a 1.53 ERA, and with the departure of Darvish is probably the best pitcher in the NPB. 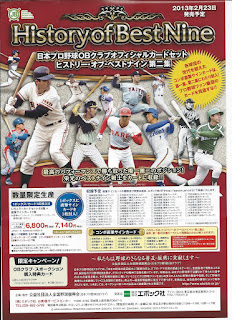 It looks like Epoch is releasing a second series to the History of Best Nine set on February 23rd. I haven't even tried to decipher any of the text on the flyer though it appears to have a checklist and possibly autograph list. The Epoch OB releases might prove to be helpful for my NPB Awards Collection; I'll have to look further into these sets.