One Card: Epoch One

Do you remember in 1989 when holograms started being put in packs? Japan started including holograms too (1989 Calbee, 1991 BBM).

Do you remember in 1992 when parallels first seriously hit MLB packs? Japan started including parallels too (1995 BBM).

Do you remember in 1993 when the first super-premium sets (Fleer Flair, Topps Finest) were issued in the States? Japan's first mainstream premium set hit shelves in 1995 (1995 BBM Diamond Heroes).

Do you remember in the mid-1990s when Upper Deck put the first jersey cards in baseball packs? Japan started issuing relic cards too (1997 BBM Diamond Heroes).

Do you remember around 2001 when relic sets (Absolute Memorabilia) changed the focus toward hits? In 2002, BBM dropped Diamond Heroes to introduce Touch the Game, a relic-based super-premium issue.

Do you see that many releases in the past few years have been high-cost ultra-premium boxes with few cards (Topps Tribute, Museum Collection)? Japan has that too: Epoch now, and Frontier in the past, and BBM has issued a few high-priced sets as well (2018 BBM Glory, for example).

On Demand cards have become relatively common in the US, with Topps' online offerings, especially Topps Now. Well, Epoch has Epoch One. 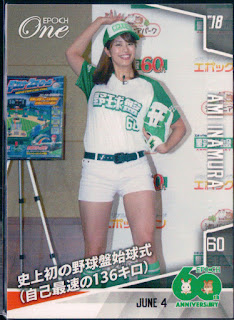 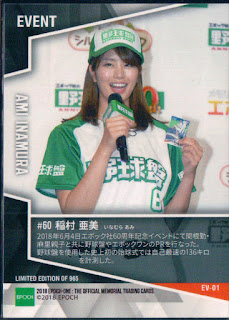 I've ordered a few cards from Epoch One just to forward on to NPB Card Guy, but I do have a card for my collection. And while I believe this card was distributed in a manner different from the usual online ordering system, it does tie in to that set.

Ami Inamura is perhaps the baseball poster child... or baseball model... or something like that... of the past several years, appearing in JWBL (women's baseball) and NPB (men's baseball) sets several times as she makes appearances at events and throwing out first pitches. Of course, I had to have this card for my collection as well.

What's next for MLB? And how long will it take for NPB card manufacturers to copy it?
at 7:00 AM