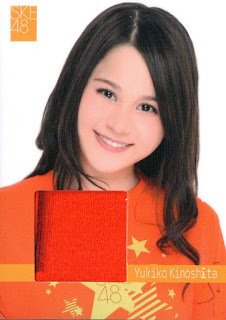 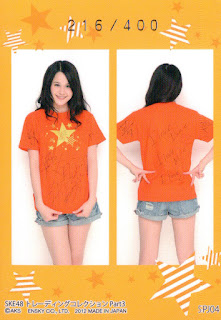 This is my third or fourth Yukiko Kinoshita relic card. She's a former member of SKE48, half Japanese and half Colombian. She's 23 years old now and modeling/acting under the name Michelle Kinoshita.

Costume cards for members of SKE48 come from various colored shirts. These are then drawn on with marker, worn for a photo shoot, and snipped up for the relic cards. This has been done several times, and this format has been used for AKB48 relic cards too. I guess you can get 400 tiny squares from a young lady's shirt. A few additional squares are used on autographed relic cards, too.

I think I now have all of Yukiko's trading cards other than autographs. Getting a full list isn't easy because of random promotional cards, but I believe I have all of her base and relic cards, at the least. Collecting a single member is much easier (and cheaper) than chasing after full sets. And it's more fun than just grabbing a single random card for a type collection, too.

Interesting trivia; my favorite AKB48 member, Mayu Watanabe, was the lead singer for the song Kokoro no Placard. That single record was accompanied by four B-side singles, and Yukiko made her only appearance on an AKB48 single from a Senbatsu Election on that album. Senbatsu Elections are annual voting contests that determine the participants for one of that year's main singles and its accompanying B-side singles. There are other methods to determine "centers" for other A-sides and B-sides throughout the year.
at 7:00 AM