If I haven't already gotten sick of Series 1 from all the blog posts before I can find a jumbo pack, I've made it a point to buy one for my own enjoyment each year. This year, I did just that and actually got two jumbos. Here's the first, and my thoughts on 2017 Series 1. 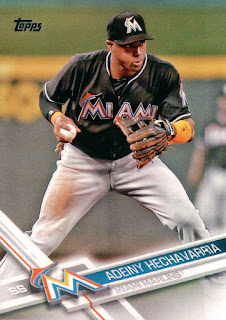 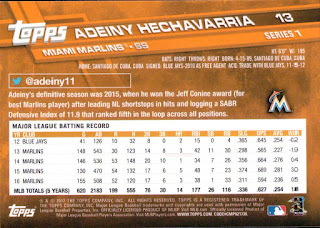 First card: 13 Adeiny Hechavarria. Wow, what a mouthful. This is the first of many Marlins. First impressions: that font is very annoying, especially in italic form. I'm not impressed with the design, though I'm not disappointed in it either. The design at the bottom is a little more invasive than I'd like. It wold be a world of difference if there wasn't fog below and around the design. As for the backs, I could do without the social media links, especially at such a large size. I get that Topps wanted to include a blurb on all of the cards, but it has been kind of Topps' "thing" to include full year-by-year career stats. I love looking at the back of my cards and rediscovering a veteran player I had forgotten, or realizing that they've been playing forever - or for many teams. Now, a 5-year veteran looks almost the same as a 19-year veteran. 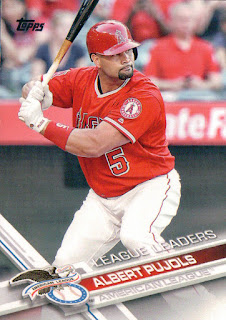 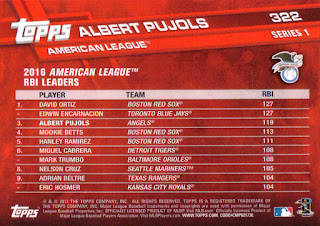 There are a few subsets included in the first series. I got a couple League Leaders. Pujols is not the league leader, Ortiz is. This isn't fair, just so Topps could include another Pujols. And I like Pujols! Though it's nice to see Pujols is still performing well and garnering attention. 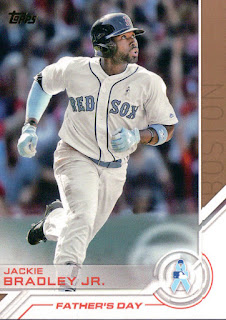 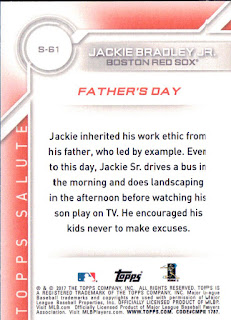 I wasn't sure what this set was, and I'm still not sure. Until I read the blurb, I thought this card was a salute to Fathers Day celebrations, not Jackie Bradley Jr's father. However, I am now a little more interested in what else this set holds, so I could end up with it in my collection. 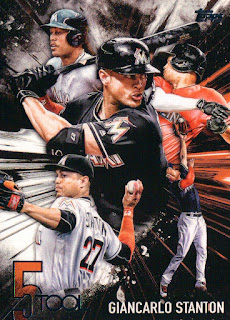 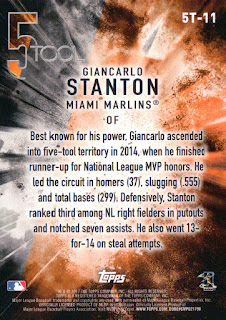 I might be skipping this 5-Tool set though. I like the design, but it would be so much better on a full-size poster. 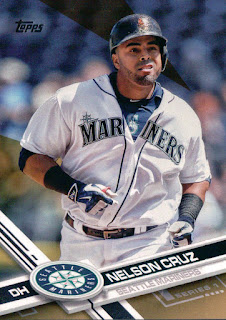 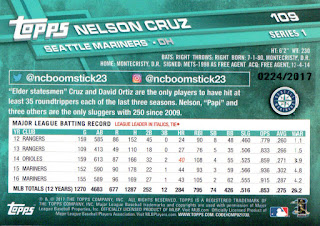 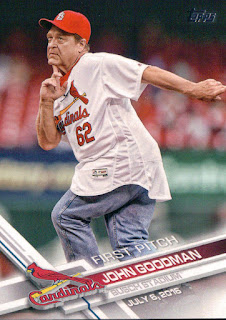 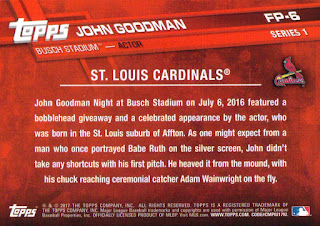 First Pitch is back. I'm really happy about that. John Goodman is a good card to have. And I'll get the whole set eventually! 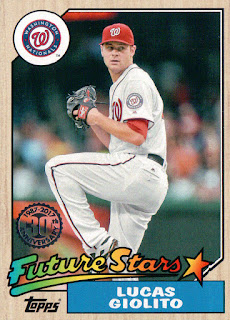 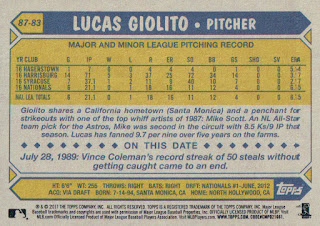 Didn't Topps do 1987 throwbacks recently? Why, yes they did, in mini form! There are good tie-ins to 1987 baseball stars in the blurb on the back. And I like the On This Date. The backs have a vintage feel. If I can find a full set cheap, I might pull the trigger. 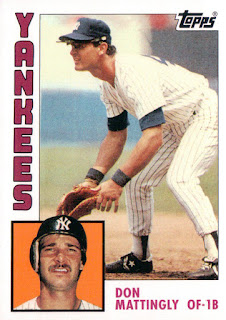 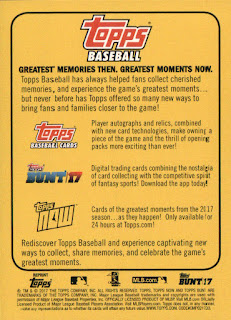 Cool, a Don Mattingly throwback or reprint or... oh it's an ad.

Horizontal time! And the first two cards are veterans I've come to respect over the past couple years.

As I mentioned, I ended up with several Marlins cards. My only team card was of the Marlins. The back mentions Jose Fernandez.

The very next card was this checklist with Marlins on the front.

Overall, the 2017 base set is a take-it-or-leave-it set. I didn't like the fog in 2016, and I don't like it this year. One small thing that I wish Topps would change would be a distinct design, or at least something a little more unique, for subset cards. League Leaders, team cards, and checklists don't stand out when quickly skimming through the cards. 1989 Topps, for example, used the same team name design, with the scripted team name in team colors, but used a foggy border and a little less design on the front. All-Star cards (whatever happened to the Topps All-Star Team?) again used the same script design, but with a different layout and solid-color backgrounds.

I'm a little more intrigued by the insert offerings than in the past. I could get the 1987 set, I will get the First Pitch set, 5-Tool might be mine at the right price. I saw MLB Network cards on Cardboard Connection, and if they're affordable that makes a good oddball set to get. Topps Salute is another large set that I might buy if it's cheap. Why did Topps do so many large insert sets this year? There's something like 660 cards for a non-hit master set. 1987, 5-Tool, and Salute combine for 250 cards. I'll be waiting for a good deal later in the year.
at 7:00 AM