A typhoon is raging across Tokyo as I type this. 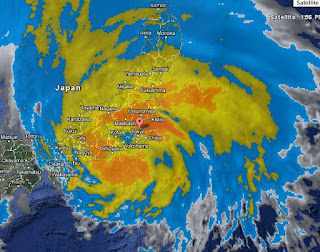 I'm risking life and limb to bring you this post! Okay, so in all honesty, I'd just be sitting in the same place, staring at the same computer screen, if I wasn't writing this post, so I'm not doing anything different. Besides, where would I go? Don't worry, though, I should be fine. If I die, I'll let you know.

What is your favorite vintage card and/or 90's insert card in your collection? Why? How did you acquire it?

Most of my vintage cards were bought for my type collection, and don't really hold any sentimental significance. I don't have a Nolan Ryan RC (which would certainly top this list if I had one). I have some really cool older cards, but they don't mean much other than a check off my list. Those checks are more significant than, say, 1988 Donruss or 1996 Upper Deck, but they just aren't my favorites.

The 1990s were my golden years as far as collecting was concerned. I had way too much discretionary income and it all went to unopened boxes and packs. I especially love Fleer's offerings - they always seemed to have the best overall inserts from year to year in nearly every product. I especially loved the Pro-Visions issues in Fleer, and the "gimmick" inserts found in Ultra in the mid-'90s (acetate, textures, etc).

Two of my collections center on prominent insert sets of the 1990s: Baseball Heroes and Diamond Kings. I love the designs and concepts behind those offerings.

I have over 100 insert and specialty sets completed or in progress from the 1990s that I could choose from.

But I think I'll go with this card: 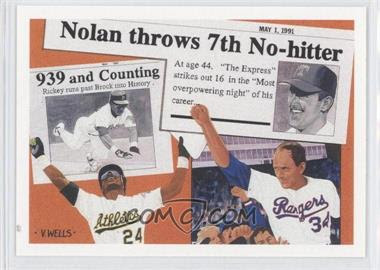 1991 was a big year in my life. I really, truly embraced the baseball card hobby, visiting card shops frequently, and buying many more cards than before. Of course, I can say that about several years, but 1991 was the last year I lived in California before moving to Georgia. Nolan and Rickey were two of my favorite players, and these events defined my summer. Honestly, I don't remember anything else about 1991 other than Rickey Henderson, Nolan Ryan, and the Braves/Twins World Series. I made my first color copy ever, paying my hard-earned allowance money for an image of the Sports Illustrated magazine cover with Nolan Ryan on it (so I could display it and keep the original magazine in good condition).

So when I pulled one of these cards from a pack in 1991, that was a big deal. Even if my world didn't revolve around these two guys, it would have been a big deal, because I think this card booked for big bucks even then. At least, a good bit more than the 50 cents it would cost on Check Out My Cards today (book price: $2.00).

I'm not sure if the card that is in my collection today is the same one I pulled in 1991. I might have picked up another extra copy or two and the original pull is sitting in a duplicates box in my storage unit. But this card is certainly a treasure of mine!

And while I'm talking about Upper Deck's SP insert cards... Did you know Nolan Ryan is the only player to appear three times in the SP issue (and the only one with two cards all to himself)? Robin Yount has two cards (one with George Brett), and Derek Jeter has an SP card and an R- prefixed SP-style card issued in 2010 with three other Yankees.
at 7:46 AM

Labels: blog bat around, players, This Card Is Cool