The Carp are probably the most popular team overall in Japan. Sure, the Giants are more famous, but Carp fans are amazingly devoted and can be found all over the country. So Carp sets are pretty common - there are several box sets issued every year. But this is the main team set that BBM issues, so what's in it this year? 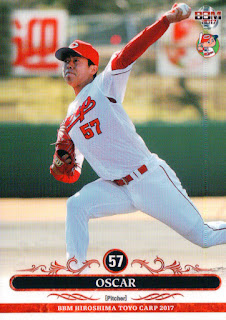 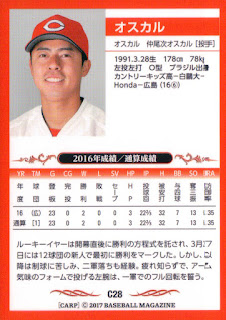 Here are the base cards. I really do enjoy BBM's team set designs; simple, clean, and unobtrusive in most cases. 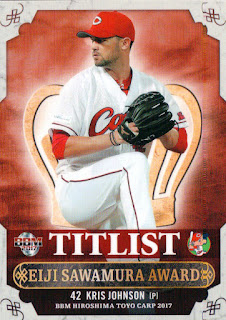 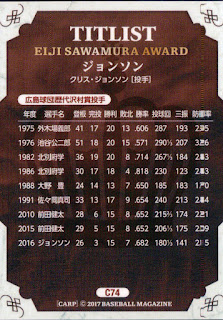 The Titlist subset features players who won awards the past year. The back lists other Carp members who won that award - Kenta Maeda is shown from 2010 and 2015. 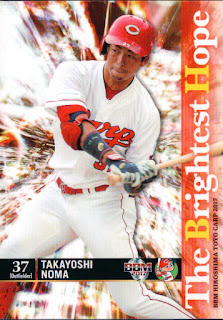 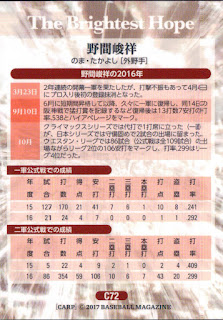 The Brightest Hope subset has some of the better players on the team with some previous-year highlights and comparative statistics.

Oddly enough, there is a base set partial parallel which is serial-numbered to 100 copies. I believe the Carp are the first team to get a paralleled base set this year.

Moving on to inserts, all of the regular Carp inserts you'll see below come in parallels of 100, 75, and 50 copies. The 100 parallels really aren't different other than the serial number, while 75 and 50 have patterned holographic/refractive backgrounds instead of just foil backgrounds. 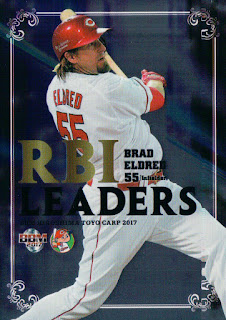 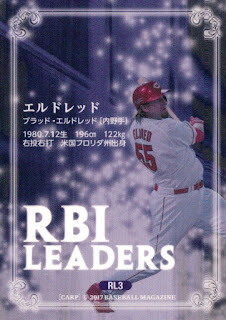 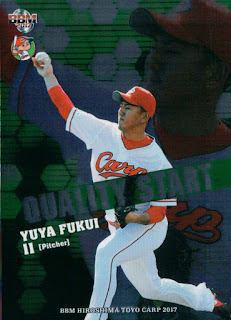 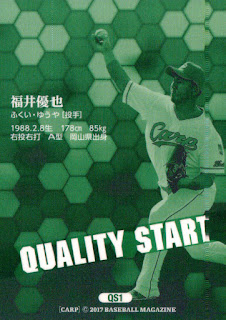 If you didn't guess that Quality Start has the team's top starting pitchers, you guessed wrong. 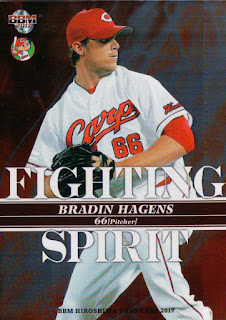 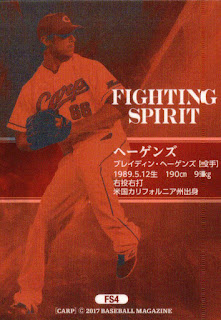 Fighting Spirit has no real meaning, other than perhaps the players who appear to show the greatest effort on the field? What does that say about the other players?

Fame of Carp has the famous Carp members. Mmmhmmm.

As you can see, the insert sets are the run-of-the-mill foil-covered nonsense that BBM always issues.

There's also a Phantom insert set, numbered to 25 copies. This is a limited, super-shiny card set that's being included in all the team sets this year. I've seen a couple on YJA, but I don't have one yet.

The Carp set includes the usual autographs for the whole team, along with the standard combo autographs, silver and 1/1 gold version autographs, and rookie autographs.

Furthermore, the Carp set also has a memorabilia set including a patch parallel.
at 6:30 AM