There isn't much discussion about Japanese cards, when compared to MLB issues. But some people don't care for the non-BBM issues partly due to the design. I enjoy them because they include a variety of players that don't usually appear in the historic sets issued by BBM, plus a nice view at historic uniforms for some of the older teams (especially when players from the 50s are included). Sure, there are some players that seem to appear in every Epoch set, but depending on the topic there are some cards for players who are rarely seen - or haven't been seen in decades! 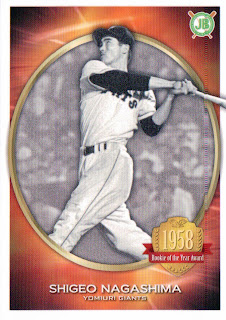 The orange card fronts aren't fantastic, but the topic of the set - Rookie of the Year award winners - is very visible on the front. With only 40 cards in the set, not every ROY is represented. But cards for awards issued from 1953 through 1998 can be found. There are a few players who don't have BBM cards, or haven't had BBM cards since the 1990s. 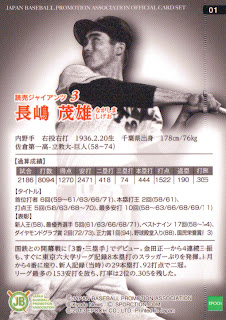 The backs contain biographical information and career statistics, blue some highlights. The bottom paragraph details the player's ROY season highlights, though a statistics line for that year would be welcome as well.

The rest of the cards can be seen below: