I've got all my Tickets now, so I can join the Stadium Club! (Hah, another bad pun!) These 2003 cards came in an auction lot at a good price - the seller warned that two of the packs had been opened and searched, and I assumed all of the packs were searched. I'm not expecting anything other than base and inserts. Cards over #101 are SPs in this 125-card set (though there are two versions for each of the SPs, making the master set 150 cards). This was called the Relic Edition because one in 24 packs contained a relic card - there weren't really any autographs that you could expect to pull (a couple were inserted but at astronomical odds). The 2003 Stadium Club set is one of a few that I still need to finish my run of that issue - I still need 1993, 1997, 1999, and the 2003 and 2008 clusterflips. These packs will go towards that '03 set.

So let's get started! Six cards per pack, with one of them being a gold chunk. These are the two pre-opened packs: 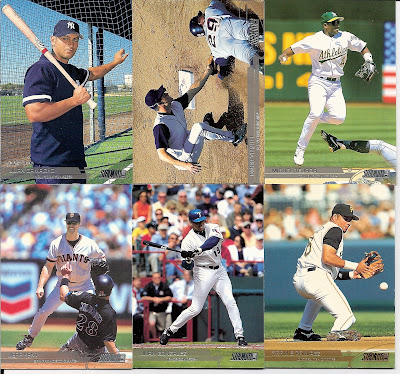 Juan Camacho FY, and Aramis Ramirez gold. Jeff Kent was yet another player on my '03 MVP team. There are three great plays up the middle in this pack, and I'm not sure what Aramis is doing with his broken-looking ankle.
at 12:24 PM