Let's look at Fleer over the years, shall we? All these cards, and more, are part of a trade with Ted of Crinkly Wrappers.

So we start at the beginning. '81 Fleer. Not bad, figuring what we get ten years later. And the '84 design is really nice - clean and crisp. What is it about '84 designs that attracts me to them?

1991 was a bad year for Fleer. Mainly, the yellow. Way too much. And there was nothing to this design, just like Donruss '88/'89. Compare that to the insanity of four years later - 1995 Fleer was insane. Not a bad design, especially for a '90s card, but way too much going on for a flagship issue. And if you compare it to 1994 or 1996 (see below), it's completely different.

The 1996 issue returned cards to their basics, and probably ushered in the era of throwback sets like Retro, Heritage, and of course Tradition. Fleer would use the Tradition name from basically this point forward for its base brand, using traditional card stock designed with a classic feel meant for autographs. The 2006 Fleer card shown has a low-gloss finish as well. 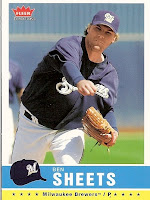 This 2006 Tradition card features gloss and a more modern-throwback design, instead of copying prior releases.

Ultra was the first premium issue from Fleer, though the '91 set didn't live up to its name. The '92 and '93 (shown) issues look similar and actually was a premium set.

By 1999, Ultra started a tradition of a foil-highlighted script of the player's name on the front, along with additional information, on the lower portion of the card on an otherwise design-free card, focusing on the imagery. The technology-inspired design of 2003 is an exception. 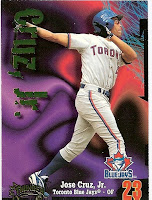 Donruss was the king of the relic and parallel - or could have been called the King of Gimmicks. Fleer had their hand in gimmicks, too, of a sort - they created several different one-off sets such as those shown here, and since 1992 have created a mountain of insert sets, some good and some bad. In the '90s, they brought us Circa, with the '98 Thunder version, and Metal Universe, which featured crazy foil backgrounds behind player images.

Skybox releases were mid-premium brands, and the simple design here would work with some of Ultra's high-quality photography. The color-on-black and white isn't too bad on this set. And the Authentix set featured a ticket stub design that I find attractive.

Inscribed was another theme set, but the design looks like something more portrait-like than autograph-focused. However, the nice picture in the middle is probably perfect for autographs, and the simple elegant design is nice. Platinum was a set run that seems to have never found a home - one year it copied the '86 Fleer design, another featured a starburst logo with curving player details (to the right).


We all know the company Fleer died in 2005 and was bought by Upper Deck, where it was resurrected for two more years as Fleer, Tradition, and Ultra releases.
That concludes a look at the Fleer cards Ted sent me as part of a massive selection. The next installment will poke around Score and some of the oddballish stuff he included. Stay tuned!
at 2:52 PM