Josh Willingham had trouble finding a home on the field. He played shortstop at the University of North Alabama, was the starting catcher for the Marlins in 2006 and 2007, went to the Nationals as an outfielder in 2008, 2009, and 2010, and now is the A's starting left fielder. On opening day this year, he was the sole run producer, going yard in his first regular season at bat with his new team. After Friday's game, he's still the only player on the team with any home runs, though he does also lead the team in strikeouts.

At some point in 2008 (when he was still with the Marlins), Upper Deck decided it would be a good idea to make a trading card with a big swatch of jersey, and have the player sign that swatch. And so we have this: 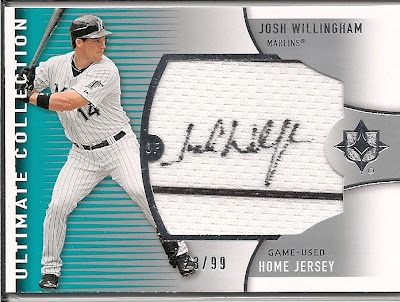 Numbered 23/99, it's a nice sized swatch with two pinstripes (one is just barely showing at the top) even if they are sideways. And since the autograph is on the jersey, there's room for the numbering, photo, and all that other design stuff on the front. Though I'm not a fan of signatures on jerseys. They always come out looking a bit choppy (signing fabric isn't easy). I picked this nice thing up off eBay and it arrived this week. In it goes to the A's signed-card team set. Can you tell I don't really care what team the player is pictured on for the collection? Makes it less expensive.

I also picked these up for my autograph collection: 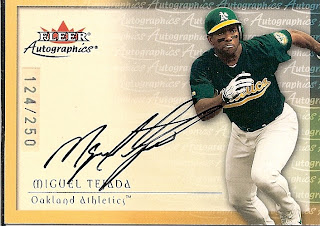 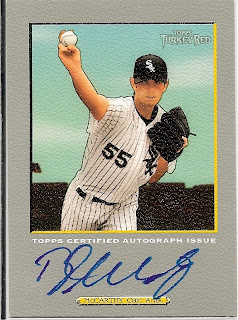 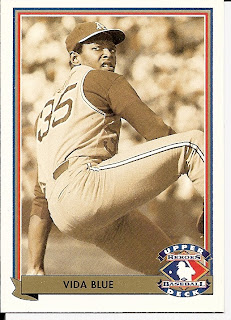 And this card arrived yesterday, finishing one of the smallest sets that it's taken me forever to complete. This is part of an 8-card set depicting Hall of Famers and great players from the '70s. Four of the cards were released in 1991, with the other four released the next year. Cards were found in specially marked packs. This is also one of the first autographed sets issued - 3000 of each card were signed by the player and randomly inserted in packs.

I picked up the first four cards as a set many years ago, but it's taken me nearly a decade of occasional searching to find all four cards from the 1992 issue - coincidentally all of them have been picked up in the past six months. And actually, the Lou Brock is sitting on COMC waiting to be shipped.

I also received my first Sportlots purchase today. I finished off my '11 Topps set (YAY!) while trying to complete the '99 Upper Deck set. I also picked up several 2006 Upper Deck cards (most of them coming from a second dealer).

Some of the many 1999 Upper Deck cards I received. I think this is my least-favorite flagship Upper Deck design. The foil dominates the card; if they had left it off the rest of the design could have been okay over the top of the photo (even if they kept those vertical-ish black bars). And most of the photography, especially from this lot, is quite boring.

There were only three horizontal cards in the lot. I do like the Branyan image, though it looks like Mo Vaughn is about to get into a fight. Overall, the cards I received lack the exciting imagery that people came to expect from Upper Deck. 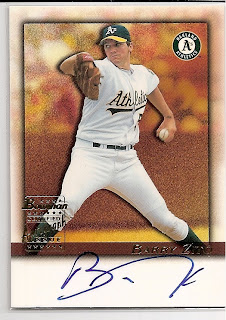 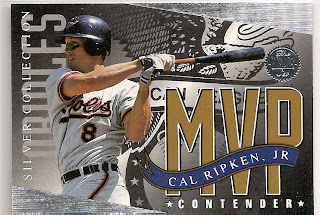 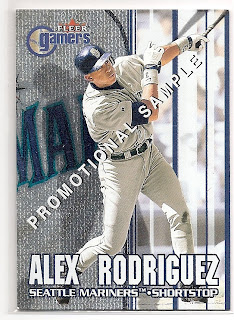 The last thing I have to show you is this Barry Zito autograph. Hey, this post features two former A's who are now autographs, whose cards are signed by the A's! I picked this up fairly inexpensively, and it came as part of a lot. What else came from that lot? Well this stuff: 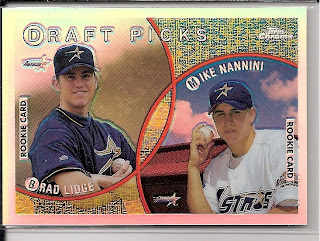 The Ripken card is from 1994 Leaf, and I had never seen it before. Apparently, if you had the MVP winner for the AL or NL you could mail in the card and they'd send you a prize and have a chance at another prize. The A-Rod promo doesn't exactly fit into my collection but I'm fitting it into the samplers. And the Chrome Draft Picks card is a refractor that I needed for the samplers. Also in the box were several other baseball cards including an A-Rod bat card and a rookie autograph, and a bunch of football, basketball and hockey cards including some autographs, numbered cards, and jerseys. I'll be using  those as gifts or contest prizes or something. I think there was 20 of one particular basketball card. Time to bip!
at 2:45 PM