Finally Answering the Question: What do you put in a snowboarder's relic card?

If you're making a card for the Real Venus set, it doesn't need to be a piece of snowboard.

When it comes to BBM's Real Venus set, there isn't much to expect. There's a base set and insert set, some parallels, and a few variations of autographed cards. Really, BBM doesn't do much with relics at all, which to me says that it's more expensive or difficult to make a relic card than an autograph card. I guess when all of your autographs are stickers, it's pretty simple, right?

In 2013, BBM did make a relic card for one of its Real Venus subjects. Karen Iwadore was the poster athlete for the set, and had some special cards made with her wearing various cute Christmas costumes. 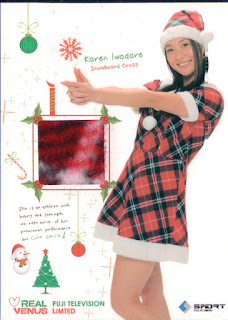 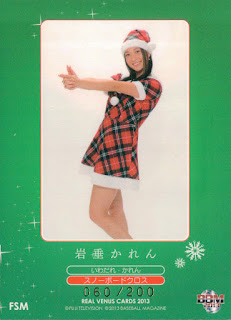 #FSM is a "Fuji Television Limited" card with a swatch of a felty plaid Santa dress. This card is serial numbered #060/200. 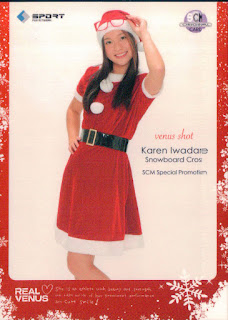 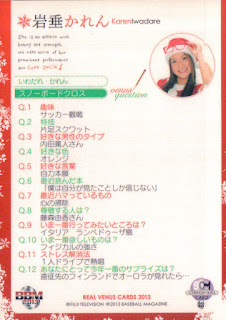 She also had a card in SCM Magazine, wearing a standard cute red Santa dress. This wasn't a relic.

I guess the answer to "What do you put in a snowboarder's relic card?" is: a Santa costume. I don't think I want Shaun White's relic card.
at 8:00 AM