Perhaps this post is a bit premature. I visited Nagoya BITS card shop on my first trip to Nagoya about a month ago, and I picked up a few oddballs I saw. But I'll be returning in a couple weeks when I go back to Nagoya, so I'll have an even better look at the store. 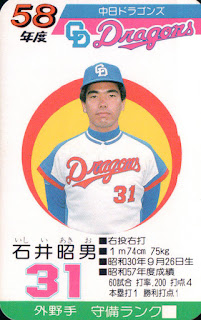 The big score for me was a small collection of Chunichi Dragons cards from several years of Takara releases. 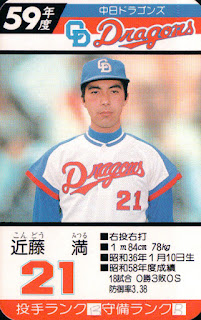 They were priced pretty fairly, especially given that the Dragons are a local team. 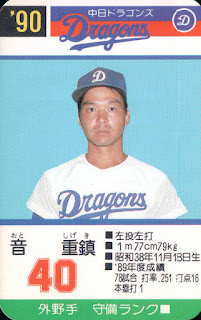 The cards aren't terribly attractive, because they're designed to be used in a game. 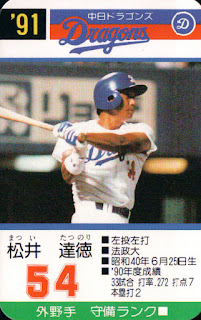 The store is a short walk from Nagoya Station, and is one of only a few non-Mint stores I've discovered. 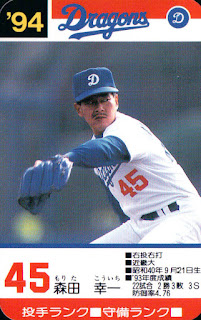 They have a good selection of other cards, but I'll share that information with you soon. I really focused on the oddballs this trip. 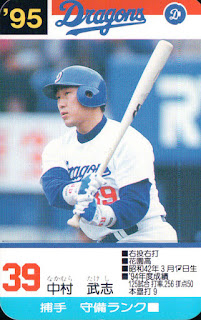 And one to grow on. 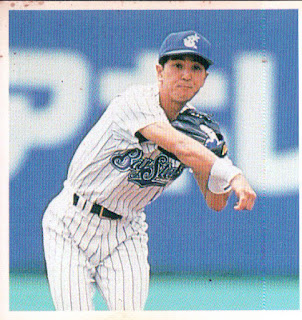 This square card is actually bundled in with my Calbee issues - it's a sticker similar to (but predating) the Lotte stickers that came out about the same time. 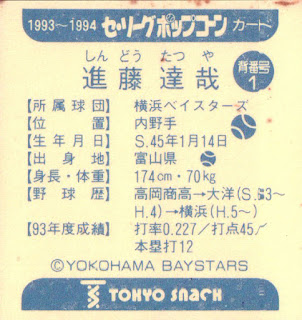 As you can see, they came out around 1993, and were issued with Tokyo Snack products. 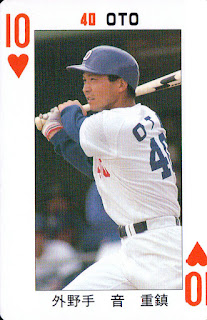 I also found a bunch of "singles" from a team playing card release. I think each card has a different player on it. 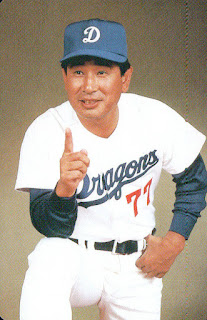 This is the back. They all feature this guy, who was the Dragons manager for a couple years. 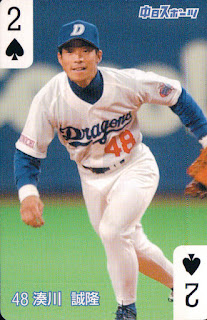 There was another team playing card issue with a much more modern design, as well. 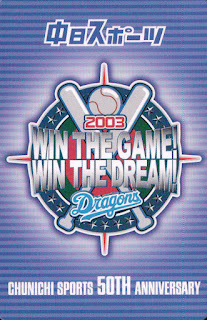 I'm assuming this was released in 2003 to commemorate 50 years of sports in Chunichi.

As I said, I'll be back at the store in a couple weeks to get a better idea of what's available. I recall the store having all the regular products, but I'll pay better attention next time when I have more time to explore.

Nagoya BITS is located at 1-14-18 Nagono, in Nagoya's Nishi ward. A 15 minute walk from Nagoya Station, head out the east exit and follow the main road (Sakura Dori) away from the station. When you get to Egawa (the big road with the highway running over it), cross the street and turn left, following the freeway. Keep an eye open for the CoCoICHI curry restaurant; the card shop sits above the restaurant (stairs up are just after CoCo). It's open 12-9 weekdays and Saturdays, 11-8 Sundays and holidays. They have a point card system but you need to ask for it.
at 3:00 AM