The last 2020 set* from BBM was Fusion, a now-annual issue which fuses accomplishments from the prior season with identical, or at least similar, accomplishments in the past. One card highlights an event in 2020, with the following card (or two cards) showing that same event in a previous season. It serves as a good summary of the last season.
*BBM released a set called Glory after Fusion was released, but it has a 2021 "issue year" so it doesn't count. 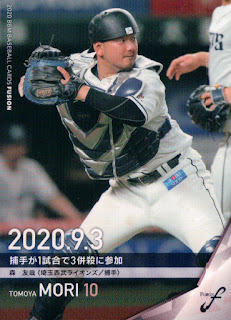 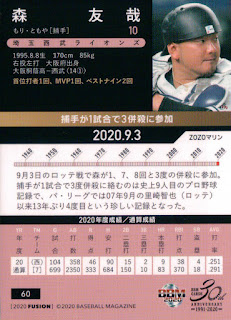 There are 99 cards in the base set, and all but one have the design seen above. The front shows the date of the highlight, with the text below it explaining the highlight. The next line has the player's name, team, and position, followed by his name in romaji and jersey number. The back has the typical bio stats at the top, with an explanation of the highlight in the middle; the bottom has the player's 2020 and career stats.

Card 99 is the only one with a different design, paying tribute to Hayato Sakamoto's 2000th hit.
There are several inserts to be found in the set. The first two are found at the same rate as regular cards. 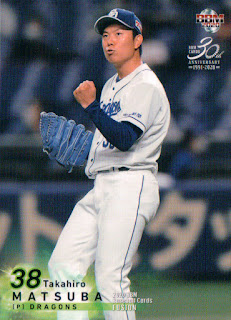 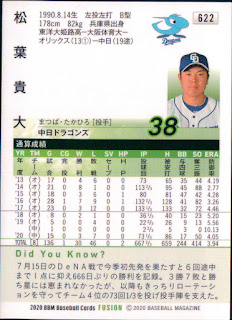 As in the past, BBM included a "1st Version Update" set mostly containing traded players plus some new ones. There are 24 cards in this set using the 1st Version design, numbered 601-624 to add to the end of the flagship set. 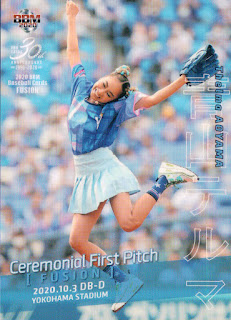 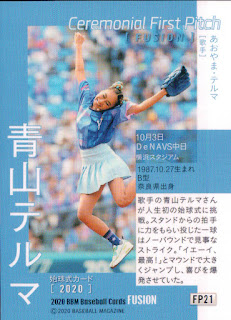 13 Ceremonial First Pitch cards #FP14-FP26 continue the insert found in 2nd Version. While the 2nd Version cards featured first pitches from prior seasons, the Fusion set has first pitches thrown out in the 2020 season. There are several variations of foil parallels of this set, found serial numbered to 250 (holo), 200 (silver), 100 (gold), 50 (silver holo), and 25 (gold holo) copies. 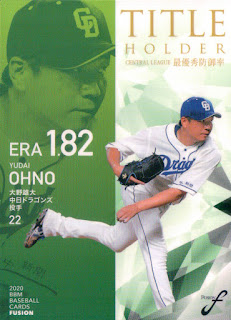 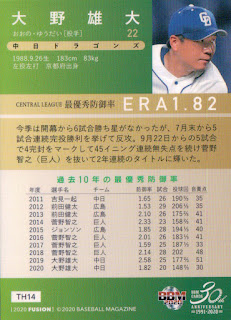 Title Holder originally was a subset found in the base set, but are now numbered as a separate set. They still appear at the same rate as the regular cards. The 24 cards in this set have 12 Central League and 12 Pacific League leaders in various categories. There are two parallels: silver #/150 and silver holo #/50.
The next two sets are standard BBM inserts, found at a lower rate than the base cards. 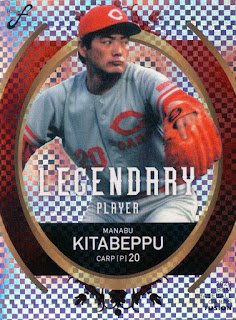 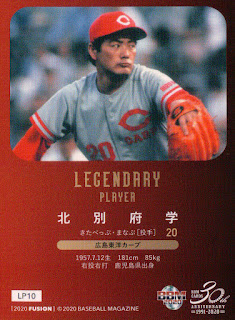 Legendary Players features 12 retired players, one from each team. These can be found in silver #/100 and gold /50 parallels. 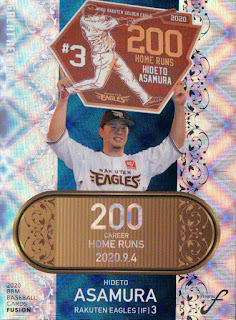 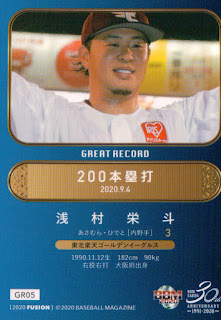 The Great Record insert set features two players from each team, for a total of 24 cards, reaching various career milestones. These too are found in silver #/100 and gold /50 parallels.
There are two premium insert sets, Phantom (#/25, 12 cards, one per team) and Esperanza (#/50, 24 cards, two per team).
As for autographs, regular autographs can be found for many subjects #/10-90. The cross-set Cross Sign Autographs feature 16 cards using the Cross Blossoms design, serial numbered between 10 and 30 copies each. Finally, nine First Pitch Autographs can be found #/25-55 copies, with a special Foil version #/5.
at 6:00 AM