A long time ago, there was a magazine called SCM. Well, not that long ago. The last issue came out in 2017. SCM stands for Sports Card Magazine, and it was the Japanese equivalent of Beckett. It had previews of upcoming sets, articles on featured sets or players, and a price guide which rotated through different prices - Calbee sets, BBM sets, soccer sets.

It was issued by BBM, which brings up questions of confict of interest; a card manufacturer produced the magazine listing card values for their cards. But, then, the prices in the magazine were supposedly provided by JSCA (Japan Sports Card Association), which after some research, seems to be the card shop association, or possibly associated with or run by Mint (the major chain of card shops here in Japan). Which, too, brings up several questions about conflict of interest and price fixing.

But that's not the point of this post. Also found in the magazine were cards. Some cards had original designs, but others served as previews for new or upcoming releases. Since the magazine was produced by BBM, the cards inside were also BBM cards. And because BBM produces sets for a wide range of sports, the promo cards also cover the range of sports from baseball to wrestling. NPB Card Guy has a comprehensive list on his blog.

I soon took notice of SCM promos as I visited card shops (and the Weekly Baseball promos as well), and eventually realized that there were more than just baseball cards in those magazines. As a collector of women in sports cards, I made it a goal to get as many as I could featuring female athletes, and eventually, thanks to Dave's list, I was able to have a definitive list of cards to seek out.

There are about 75 cards, and I was able to find all of them except for the badminton cards from Issue 60. Four total cards were found in that set: one soccer card and three badminton cards previewing an upcoming box set. The team card featuring nine players wasn't too tough to track down, but the two single-player cards have been tough. 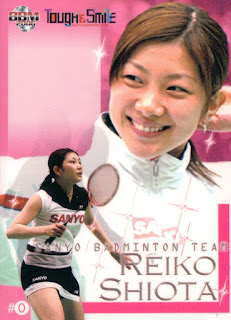 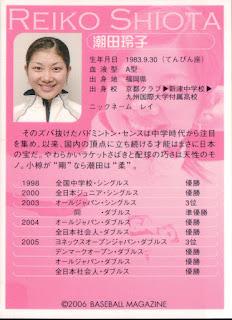 After setting the two cards on my watch list, I've sat, waited, and watched for over a year, and finally, late last year, Reiko Shiota's card came up in auction. It is number 0, but otherwise has no hint that it came from SCM.

So that leaves Kumiko Ogura. The hunt remains on, and hopefully it won't take another year to finish it off. Though, perhaps, I should check through that checklist again to be sure I haven't missed anything...